Ever dreamed of going to Old Trafford to watch the greatest club in the world play? Now you can.

The first thing to do is secure a match ticket. There would be no point in going otherwise.
One United membership is the first requirement because without it, the ticket office won’t even look in your direction.
Tickets must be applied for six weeks ahead of match date, and we must provide them with a membership number – one match ticket per One United member, so you can’t have tickets for your whole family on one membership number.
Make your application through tours@manutd.co.za as the branch secretary has access to a Branch Secretaries page on manutd.com and this has more chance of success than you going into the general ballot – like 100% as tickets to the Branch are guaranteed.

There is also the option of the branch tickets.
We have 4 season tickets, which means 4 seats at all home matches, including FACup and European matches. These are allocated to branch members on a first-come-first-paid basis. In other words, any reservation is confirmed only on receipt of payment. There are 2 seats in the Stretford End and 2 in the Northwest quadrant. All tickets currently priced at R1160 each.  FACup and European matches cost the same for early rounds.  General match tickets are tagged to your membership card, which you will use for entry to the stadium.  You will be given a letter confirming your reservation should there be a problem. In the event of your using any of the Season Tickets, you will have to collect a paper ticket from the Membership office, and you will be asked to produce photo ID.

What to do at Old Trafford

While there it would be a sin to miss out on the stadium tour and a visit to the museum. You can book online for the stadium tour, and booking is essential. Tours run every day, except on match-days of course, and Christmas Day. You will be shown the stadium from various points including the disabled section which is situated directly under the away fans section, the players lounge, and you will walk down the tunnel to the (recorded) roar of the crowd. The tour guides are very knowledgeable and you will find it all very interesting.

Whatever you do, don’t miss the museum. United has so much history, and the entire facility is crammed with silverware, shirts, pictures, awards. There is a special section dedicated to the Treble of ’99, and of course the Munich tribute is an absolute must. The newly-named Munich Tunnel, which runs under the Stretford End, also bears tributes to the lives lost at Munich. Except on match-days, you can have lunch in the themed Red Café, situated in the North stand. Don’t expect 5 star food, but it is a fun experience.

There are plenty of hotels in the immediate vicinity, but taxis are plentiful if you are too far away to walk. Take a tip though, if you do have to take a taxi to a match. Drivers won’t stop and pick up passengers after the match unless you’ve made arrangements. Hotels get very busy around match-days, but the internet allows one to find accommodation more easily these days.

There are several options for getting to Manchester from London. Going by train would be the quickest, but certainly not the cheapest. Rail tickets can be booked on-line and if you do it in advance there is sometimes the benefit of cheaper tickets available. Try either the British Rail or Virgin websites. Coach travel is another option but that could involve many hours of sitting on a coach, with sometimes a lengthy wait at Birmingham. If several of you are travelling together, why not consider renting a car, even for the day? From London it would be the M1, on to the M6, then the ring road. Roads are very well signposted in England, and a lot of hire companies these days include a GSP in their vehicles. You can also download directions from www.manutd.com . The best place to be before a match (and after) would be the Bishops Blaize on Chester Road. The vibe in there is just incredible, and if by some chance, United lose the match, fans comfort themselves by singing songs insulting everyone from City to Arsenal to Liverpool to Chelsea. It’s great fun, but you do need a match ticket to get past the bouncers on match-day. It’s Peter Boyle’s hangout and you could be present when he brings out a new tribute to one of the players. It’s in Bishops that Stretford Enders learn the new songs. An alternative would be the Fanzone, situated just outside the North stand. Its open for about 3 hours before kick-off and an hour after. Somewhere to unwind and have a bite to eat before the match, and it also makes a good meeting place – especially if you have several people to meet up with at different times. The £2 entry fee is nominal really, but save the stub to gain access post-match.

On matchdays the stalls set up around the stadium provide a different type of merchandise. The name ‘Manchester United’ is patented so you won’t see anything bearing that title on the stalls, but as there really is Only One United, everyone knows which team is referred to on the shirts. The selection is always topical, with lots of digs at City, Liverpool, Arsenal and, these days, Chelsea. Cost is around £7 for a shirt and while you can get better quality in the Megastore, it’s the stallholders wares that reflect the moment. Aside from the Megastore and the stalls there is also Red Star Sports. Up on Chester Road, next door to Bishops Blaize, Angelo can be relied on to stock both the latest official and unofficial merchandise. He has a wealth of signed pictures, as well as badges, and even replicas of the Premier League and Champions League trophies!! If anyone has information to add which they think could be of use to visitors, please contact  ethelred@mweb.co.za
Useful numbers and contact information: Megastore/Museum and Tour Centre/Red Café: www.manutd.com
Red Star Sports: www.redlegends.co.uk 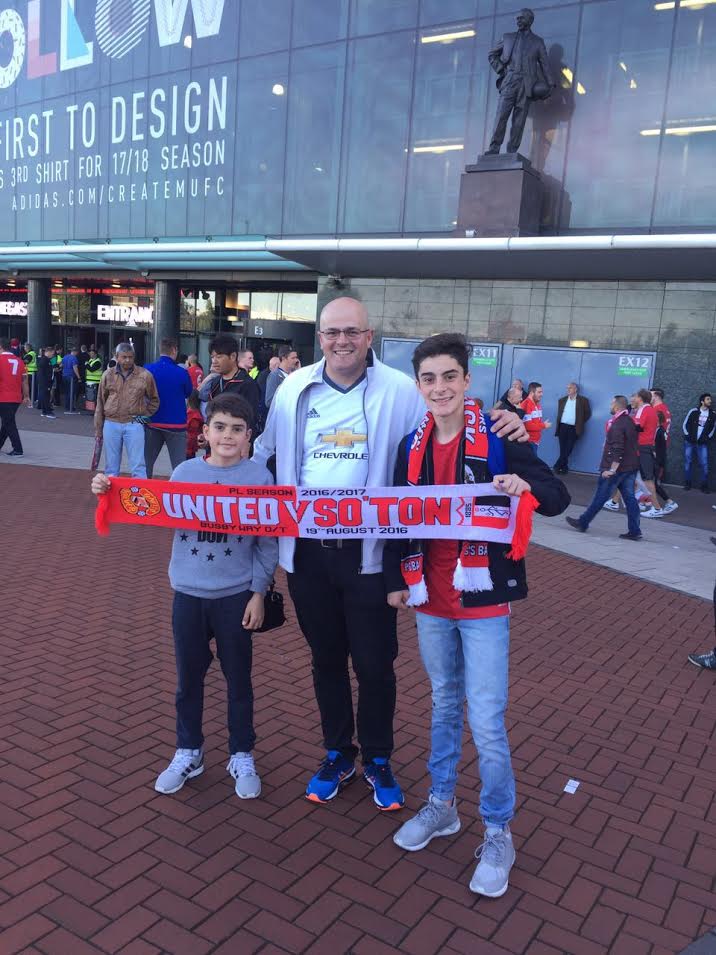 A dream come true and what great spirit. Thanks to Jose and the boys.